Communication is difficult especially in public situations, Payam Pakmanesh offers some advice to help you out.

How to communicate clearly by becoming a Chameleon

"Can you explain this one more time so we can understand it?"

Shaking like a frightened poodle, she didn’t know how to respond to that. She just got through explaining. The humid conference room was dead-silent and the seconds began feeling like minutes.

The breathing of those watching grew louder as they sat on their perfectly beige ergonomic chairs drinking their lattes. The audience disconnected.

She tried to explain why there were errors in the application, but the audience wasn’t following. Nothing she said resonated with the people listening.

Her hands were trembling and she froze as she made eye contact with one of the directors in the room.

Not sure how to do it and having a history of being anxious talking to people was nothing knew for her. She was afraid the conversation will fall flat. At least, this is what always happened to her.

Communicating clearly is what separates the mediocre from the best. If you can’t communicate your thoughts or ideas clearly, especially to those who are not technical, it’s nearly impossible to grow.

A common misconception is that excess words correlate to better clarity, but that just isn’t true.

It all starts with empathy and understanding who you are speaking to. Begin, by asking yourself the most important question.

Who is your audience?

These things matter and your language needs to change for each of these different audiences. Maybe you know this, but just can’t figure out how?

Let’s pretend you’re talking to a guy. Call this dude Frank. You want to explain to Frank who George Washington is. What would you say?

Go ahead and give it a shot before continuing to read.

...Something about him being the first president of the United States?
...Or how he’s one the greatest leaders?
...Perhaps that he’s that old guy with the beard on the dollar bill?

Easy enough? Okay, this time, let’s pretend Frank (your audience) barely knows English and knows nothing about the history of the United States. Now what would you say?

This is where things become truly fascinating to me.

How do you break down concepts that make it easier for others to understand when they only know half the meanings of the words in the sentence?

Better yet, how do you communicate clearly to someone who knows nothing about what you are talking about?

Does someone who knows very little English know what the word president means, How about what the United States encompasses, or any of it’s history?

More than likely not, you would need to dig deeper and explain that George Washington was a great leader. Wait a second, they don’t know what the word leader means either. Damn...

What do we do?

Step 1: Provide the simplest version of the idea

Think about what it is that you are trying to explain and begin at the simplest version of that.
Let’s take the word leader since that might be the simplest idea of what a president is.

For example, you could say something like, “If there are many people, we need one of them to take charge and make important decisions. This is a leader. For our country we have one leader. They are known as the president.”

Follow me so far? Find the most basic explanation/word for what you’re explaining and connect it to an idea.

Step 2: Put yourself in their shoes

Next, pretend that if you were the audience, would you understand what you just said?

Actually envision yourself as the audience. It’s a simple, yet a very strong mental shift to consistently put yourself in someone else’s shoes.

Step 3: Relate to the audience

After you confirmed the audience understood the most basic explanation, you’ll want to provide an example or analogy, but you want to relate it to something the other person does/likes. This is what really cements the logic.

Let’s take the previous example. Pretend that the person you are talking to is ten years old and that they enjoy Mexican food because you guys always go to Chipotle.

Now let’s help them understand what the word leader means by giving an example using Mexican food. How about this:

“Ok let’s say there’s a group of us wanting to go to lunch and we agreed on getting Mexican food. Their food makes me use the bathroom 3x as much, but I love guacamole!”

[PAYAM’S ANALYSIS: Boom. You got their attention, because now you are talking about something that relates to them. If you can inject humor, that’s even better.]

“None of us can decide where to go, so Josh, another friend of ours steps up and says, ‘I know a fantastic place around the corner with amazing salsa. You can taste the cilantro in your mouth till tomorrow morning. Sometimes I don’t even floss so I can savor it.’”

[PAYAM’S ANALYSIS: Being a leader is about stepping up and making a decision. Here we connected that decision to getting lunch, something that everyone understands. I don’t know if the cilantro thing is true, but whatever, let’s just roll with it.]

[PAYAM’S ANALYSIS: This last part is actually 80% of the definition, but taking the time to connect to a story they can relate to is what makes you an excellent communicator.]

After a while, you may try to guess who needs to be PTT’d, but It only takes a few extra seconds and can help you with your long-term arsenal of social skills.

There will be times when you may want to communicate something to someone who has some knowledge of the topic, but not enough, and you kinda are stuck with where to dig deeper using a story.

An easy way to gauge their knowledge is just by asking them simple questions that help you to know where to begin. Let’s go back to the original example in the start of this post when the girl wanted to explain why errors were showing up in the browser. What if she said:

“Are any of you familiar with errors in the browser or what they look like?”
“No? Ok, do you use Chrome? Great! In the browser, there’s an area where we can see the error.”

See how we started narrow by asking if they knew the errors and then worked backwards on a high level once we detected they did not? You will want to continue this pattern until you get a reaction by them telling you they understand.

Once you do, then you know where to start sharing more details.

Be aware of who you are talking to at all times and be ready to change your language on a consistent basis. Some people may still not understand the examples you provide and that’s ok. You only get better with practice.

Sometimes if I can’t read the person, I just ask them flat out what they love, then pivot the example to match that. This immediately heightens their alert system.

The easiest way to know if what you just said worked is just to ask them.

The secret is — letting them know that it’s ok to ask.

Let’s say I just got done explaining something to you and you only partially understand.

You want to ask a follow up question, but don’t want to look like that moron from 4th grade that always asked dumb questions and everyone made fun of at lunch by throwing leftover macaroni at their face.

Look at the difference between these two variations:

Option #1: “Do you understand now what I’m saying, Payam?”

Option #2: “Do you understand now what I’m saying, Payam? I would be happy to explain it again, because I know that some of this stuff may be confusing.”

Doesn’t the second example make you feel a little more welcomed to admit you don’t understand? A little more safe to ask for clarity?

Most people don’t like raising their hand in class admitting they don’t understand something, but this cuts through their fear.

Remember, PTT isn’t just for speaking with people that don’t have the same background as you, it helps with clarity in all sorts of communication. You’ll start to know when you are getting better when you get less questions and people tell you how easy you explain things.

Breaking complex information into bite size chunks is an art, one that I have yet to master myself.

I’ve worked on this for so long that PTT is just how I speak. It’s part of who I am.

Adapt to the environment. Watch your audience carefully. Become a chameleon.

Do you use have other tactics you use for communicating clearly?

What other things would you suggest for someone wanting to improve this area of their life? 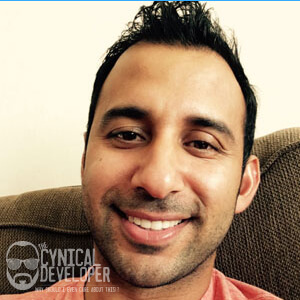 He's been in tech for half a decade and has spent the last four years as a software engineer.

Payam is originally from San Francisco, but has been bicoastal between
San Francisco and New York for the last two years after he convinced his company that he could be just as productive.

In his free time he enjoys editing videos and traveling.